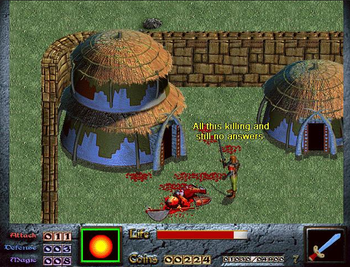 Indeed.
Dink: I'm NOT a pig farmer!
Milder: Are you farming pigs right now?
Dink: Er...
Dink Smallwood is a Comedy Role-Playing Game, telling the standard tale of a farm boy who dreams of becoming a mighty warrior, after Dink receives a visit from a local wizard. Dink's house burns down in a fire, killing his mother and beginning his epic and snarky journey to save the kingdom from cults, rogue knights, goblins, famine, and an ancient who destroyed all other ancients. Also, let's not forget the evil furniture.
Advertisement:

The game was developed by Robinson Technologies, released in 1997 with a shareware version online. In 1999, Seth released the game as freeware, and can be downloaded here

. Even later, Dink became open source (using a variant of the license of zlib) in hopes of making it available on more systems. (If your operating system isn't supported by official freeware version, there may be a version of GNU FreeDink

, which replaces all components not covered by the zlib-like license, available.)

The game also includes tools for creating new adventures for Dink called "D-Mods". One D-Mod by the developer, Mystery Island, is included with the official release of the game (GNU FreeDink users will need to install it separately using the included DFArc utility). Other D-Mods, along with the bulk of the Dink community, can be found at The Dink Network

Examples of tropes from Dink Smallwood: