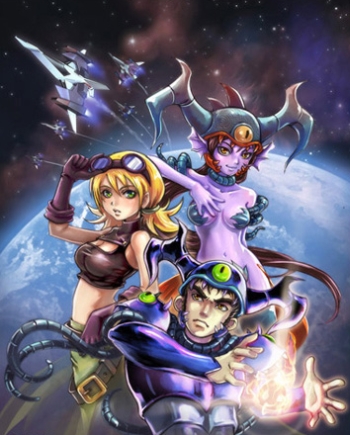 Sigma Star Saga is a hybrid Shoot 'em Up / RPG developed by WayForward Technologies and published by Namco for the Game Boy Advance in 2005.

An alien race known as the Krill attacked Earth 60 years ago, and, though they were driven off, the global ecosystem was left in tatters due to a "hole the size of Canada" getting carved out of the Pacific Ocean. Now, the Krill have returned, and humanity is ready for vengeance. You play as Ace Pilot Ian Recker, who, after leading the initial counterattack, is sent undercover in the Krill army to gather intelligence on a rumored superweapon they're developing. However, the lines between friend and foe quickly become blurred, and Recker is left in serious confusion as to where his loyalty truly belongs as he tries to unravel the mysteries of the Krill.

Out of battle, you walk around areas like in any typical RPG, but during random encounters, you enter a side-scrolling shmup battle. You're able to customize your ship's weapon using three different types of Gun Data chips, which are found in overworld areas. Cannon chips determine how your ship fires bullets (i.e. straight forward, spreading, aimed manually, rapid fire). Bullet chips determine what kind of projectiles you shoot (basic, long-range shots, lasers, wavy shots, rockets, etc.). Impact chips determine what your shots do when they hit enemies (nothing, create lasting explosions, turn around, burst into flames, etc.). One chip of each type is used to create a unique combination. With the total number of chips of each type, you can make exactly 15,680 different guns. However, you can only use one unique gun at a time, because you can only switch Gun Data outside of battle.

Not to be confused with Mario & Luigi: Superstar Saga.