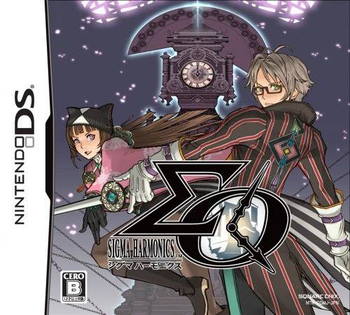 Released in 2008, Sigma Harmonics is a Square Enix RPG for the Nintendo DS, developed by the team that had previously worked on Dirge of Cerberus. It is set in an alternate Tokyo, and focuses on the story of Sigma Kurogami, the future head of the Kurogami clan, a line of 'sound-users' who can create miracles and guard the Great Clock that seals the demonic Ouma. The story begins when someone changes the past, destroying the present day and releasing the Ouma.

To put things right, Sigma and his friend, the card-user Neon Tsukiyumi, travel back into the past in order to solve a series of murders in the Kurogami household. By visiting different points in time, finding clues (in the form of 'moments of sound'), and working out the sequence of events and the culprit, the past can be changed, leading to a different murder scenario. In battles with the Ouma, Neon does most of the fighting, using her cards to perform actions whilst Sigma provides the BGM. By playing different tracks, the individual recharge rate for Neon's cards is changed. Neon can also change forms via a form of possession.

This game has an excellent soundtrack, composed by Masashi Hamauzu, and beautiful anime-style artwork. Sadly however, it has not yet been released outside of Japan.