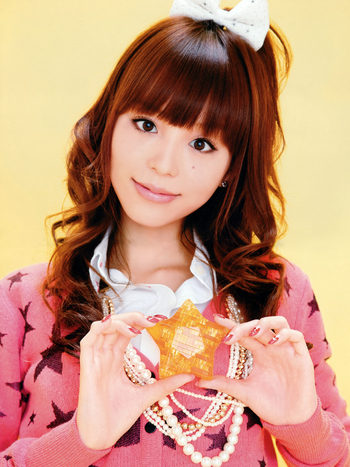 SOS-dan assemble!
I'm Aya Hirano. I have no interest in ordinary tropers, but if any of you are aliens, time travelers, or espers come see me. That's all!
Advertisement:

Probably the best known female rookie voice actor of the 2000s, "Aya-chan" was born October 8, 1987. In 2006, she rocketed to fame as the voice of Haruhi Suzumiya, but fans of Kiddy Grade (2002) would have said, "I told you so." With her role as Layla in Nana, Misa in Death Note, and Konata in Lucky Star, she sealed her reputation as a seiyuu with many voices. Contrary to what you might expect considering her roles — in which she often uses a deep, mature female voice — her actual speaking voice is quite high and squeaky (which is part of why she was cast as Haruhi, as she could do Haruhi very naturally).

Winner of Best New Seiyuu at the First Annual Seiyuu Awards and both Best Female Seiyuu and Best Singer at the second annual awards. Really cute in Real Life, and short. As well as voice acting, she sings and models as well. In fact, she's performed the openings and endings of some animes she worked on, most notably "Bouken, Desho? Desho?", "Super Driver", and the extraordinarily popular "Hare Hare Yukai" as well as insert songs, notably "God Knows" and "Lost my Music". Her hobbies include guitar, piano, reading, drawing, and calligraphy. Her guilty pleasures include the music of Avril Lavigne. In November 2010, Aya revealed on her Twitter account that she has harbored a pituitary adenoma since her junior high school days. To date, she has held off on surgery to remove the tumor because the procedure would alter her nasal cavity and thus permanently modify her voice.

In April 2011, she reported that she was under orders that prohibit her from acting in new anime until further notice

, although she will still be able to play her current roles. She officially went in semi-retirement by the end of May 2011.

However, it was eventually revealed that this was not entirely voluntary

; Lantis had dismissed her due to scandal when it came out she had slept with three of her four bandmates. She voluntarily resigned from the agency effective August 20, 2011.

Starting on August 21, she is now an official member of Grick

and has officially returned from semi-retirement as a seiyuu

. She has also signed with UMG, thus officially moving out of semi-retirement altogether

she would be in Gatchaman Crowds as the series' sexiest character: a tiny little alien panda.

She eventually made good on the sexy character comeback when she took the role of Weekend in Witch Craft Works.

It was confirmed that she would return as Lucy Heartfilia in Fairy Tail when it resumed in April 2014.

With another leading role in October that same year, it seems Aya's back on her way to being the hardest working woman in seiyu-business. However, at 2016, she announced that she would be taking a break from voice acting business... to study abroad at New York. Just for a few months.

She has also done more stage work in recent years, including playing Eponine in Les Misérables (Spring 2015) and Rosa in The Mystery of Edwin Drood (Spring 2016). Probably due to her popularity as a seiyuu, she was voted as the murderer three times

in the first few performances.

What, you want indexes? Google it up, shitlord!

When Konata tries to sing the Dragon Ball Z theme song, the result is hilariously off-key warbling and screeching.

When Konata tries to sing the Dragon Ball Z theme song, the result is hilariously off-key warbling and screeching.