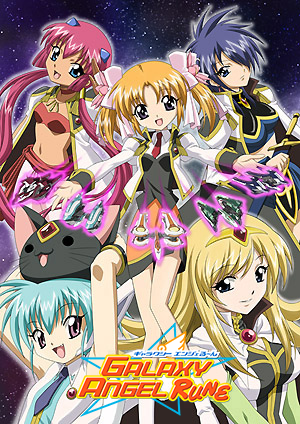 The Galaxy Angel gameverse was a serious Space Opera Dating Sim series. The Galaxy Angel anime was a comedy version that parodied the concept of Adaptation Decay, as well as everything else in existence.

Galaxy Angel Rune discarded the former and tried to emulate the latter.

Apricot Sakuraba and her friends from the Galaxy Angel II games are given counterparts from the anime-verse. As usual, Character Exaggeration is employed. The high points of the series are largely considered to be the catchy Dancing Theme, which underwent Memetic Mutation, as well as two episodes where the original Angel Troupe made cameos.

Unfortunately, Madhouse, the studio behind the original series, were unavailable and instead, Broccoli (the company behind the games) took up the project in-house and it was animated by Satelight, which meant that characters who were owned by Madhouse (Normad, Volcott, the Twin Stars, etc.) were unable to put in any appearances (save for a Lawyer-Friendly Cameo by a Normad-Missile). Perhaps the new writers were the kind of people that far preferred the games to the anime and were bitter about ruining the drama. They certainly attempted dramatic plots that would have been more appropriate to the games, while throwing in Non Sequiturs to try and make it funny.