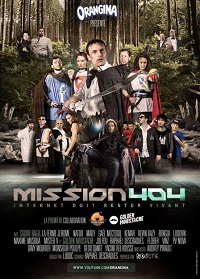 An Internet-only short film, released in June 2013. Originally planned as a commercial for Orangina, it's also the first collaboration between Golden Moustache and Studio Bagel, the two most popular French humour channels on Youtube. But don't worry, there are subtitles available.

The story begins with a worldwide Internet bug with some disastrous repercutions IRL. Only the ISA (Internet Security Agency), a bunch of super-trained soldiers, can enter the Internet to save the day. Except... it doesn't happen as planned : Martin, a young incompetent trainee accidentally enters the Internet too. Their mission is to save the Internet, and stay alive.

And if that didn't sound epic enough, it's written by Raphaël Descraques, from Le Visiteur du Futur.