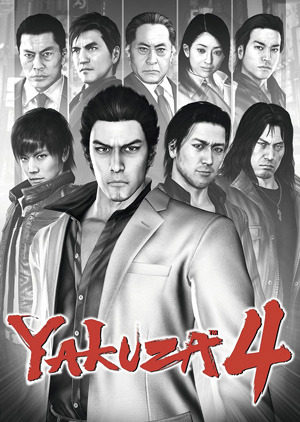 The legend of the Dragon of Dojima is no longer the only one.
"Better hurry, Kiryu-chan. It's all one big spider web. The hit back in '85. The ten billion yen. Even Yasuko-chan. If we don't do somethin'... the Tojo's gonna bite the dust."
— Goro Majima
Advertisement:

Yakuza 4, released in Japan as 龍が如く4 伝説を継ぐもの (Ryū ga Gotoku 4: Densetsu wo Tsugumono, lit. Like a Dragon 4: Heir to the Legend) is the fourth main entry in Sega's Yakuza series, which was released in March 18, 2010 in Japan and March 15/18, 2011 for NA/Europe for the PlayStation 3. A remastered port for the Playstation 4 was released on January 17, 2019 in Japan, and in the rest of the world on October 29 that same year, with PC (via Steam) and Xbox One ports releasing on January 28, 2021.

Set in March 2010, the fourth game marks a major change for the series as there is no longer one, but a total of four playable characters, who each bring their own unique moves and play style to the table. While the setting remains in the series mainstay Kamurocho, it has been expanded vertically, allowing players to explore the city rooftops and go underground.

With a highly involved, emotional story, the four playable characters all find that their separate paths lead to the murder of a low-ranking gangster, and further events soon thrust them into a conflict that threatens to embroil all of Tokyo in gang violence. The story casts every major organization in Tokyo—the yakuza, the police, the government— as members of an elaborate conspiracy, tied into events that happened both in the distant past and in the first Yakuza game.

As a result, Yakuza 4 has less baggage to deal with, so the game can be used as a starting point for the series, since a lot of new characters are coming into the game, the references to the past games are minimal and former protagonist Kazuma Kiryu is only playable during the final quarter of the game. Players can also use the Reminiscence feature to view a quick summary of the past games, a feature that would not return in the sequel, Yakuza 5.

The game was followed up by the spin-off title Yakuza: Dead Souls, a Third-Person Shooter where Kamurocho suffers from a zombie outbreak following the events of this game.

Shun Akiyama primarily fights using kicks when it comes to combat, standing in stark contrast to the three other playable characters, who are much more liberal with the use of their arms. While Akiyama only really uses his for grabs and counters.

Shun Akiyama primarily fights using kicks when it comes to combat, standing in stark contrast to the three other playable characters, who are much more liberal with the use of their arms. While Akiyama only really uses his for grabs and counters.