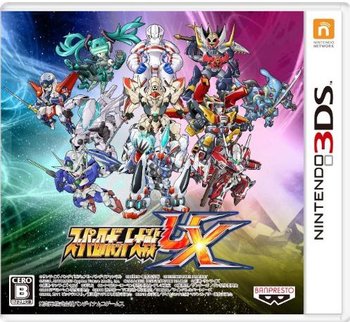 In a similar vein to the controversial announcement of Super Robot Wars Judgment, news about UX broke out barely even two weeks after the launch of the Second Super Robot Wars Original Generation. At the same time, the lineup for the game was under scrutiny like the cast listing for Super Robot Wars L:

UX marks the first instance of a series that is an Animated Adaptation to a visual novel (Kishin Houkou Demonbane to Zanma Taisei Demonbane) and an actual Super-Deformed series. UX also includes voice acting; additionally, Namco Bandai has promised Downloadable Content via special campaign maps and a "Tsume Suparobo" mini-game, in the same vein as the puzzle-solving mini-games present in previous Nintendo SRWs.

Series included in UX are (debuting series are rendered in bold):