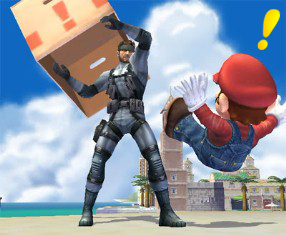 Who did you expect?
The Spanish Inquisition?
"I get a lot of new character requests from all over the world, and there are quite an array of Nintendo characters. But I can say, pretty much no one imagined this character would join the battle."
— Masahiro Sakurai on the inclusion of Wii Fit Trainer, Super Smash Bros.. As players can attest to, this is far from the only character in the series that fits that description.

Normally when time comes for a sequel or adaptation of a franchise, you can have a pretty good idea of who to expect in the returning cast. The Hero, The Lancer, the Ensemble Dark Horse, no one is surprised by their return. However, creators may want to shake things up and include less obvious characters. They could be a One-Scene Wonder, someone who had succumbed to Chuck Cunningham Syndrome, or simply a Living Prop, or even someone from outside the franchise.

In video games, particularly Mascot Fighters, Kart Racers, and other Massive Multiplayer Crossovers, this can also include characters from games that were obscure or never left their home country, or games whose genre puts them outside that game's purview. Ironically common examples of the latter two include characters from a nonviolent game (or with a nonviolent role in the game) appearing as combatants, or a pilot/driver stepping out of their machine and showing they're just as competent on foot, if not moreso. Audience members have this type of reaction to most Guest Fighters, by nature of coming from separate works and franchises.

Sometimes these character choices are praised, bringing in a previously unknown character to recent audiences, but other times the choice can be seen as a gimmick to increase sales. In video games, these characters are also sometimes accused of "stealing" a character slot, especially if a more important or popular character is missing from the game. Very often, it can increase interest if not sales in the unexpected addition, which is actually pretty sound business sense.

The trope most closely tied to the Unexpected Character reaction is the Genre Refugee, a character that is from a genre that is completely different from the genre of the show. Genre Refugees need not be pre-existing characters, however, and may not shock an audience depending on what the show builds to before the Refugee shows up. Still, if a show is strongly formulaic fantasy series, seeing The Count of Monte Cristo show up will always be a shock.

See also Hero of Another Story.

Remember, Examples Are Not Recent.