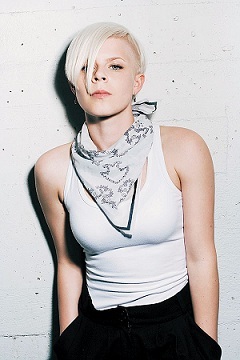 Okay, but first we're going to need some rain, thunder, and some hell's bells.

Robyn Miriam Carlsson (born 12 June 1979), known by her stage name Robyn, is a Swedish singer-songwriter, who is famed for her combination of dance-pop and keen, earnest subject matter, as shown in her hit singles "With Every Heartbeat", "Dancing on My Own" and "Call Your Girlfriend".

In the 1990s, Robyn was hailed as a typical, blemish-free pop act. Her 1995 album Robyn is Here even saw two top ten songs on America's Billboard top ten, but Robyn was dissatisfied with the box that she found herself in. Her producer, Max Martin, shrugged off Robyn's departure and gave the world someone named Britney Spears instead. Robyn's next two albums, 1999's My Truth and 2002's Don't Stop the Music, were only released in Sweden and Japan, due to her label balking at My Truth's lyrical content, effectively kneecapping her career.

In 2003, Robyn left Jive Records due to creative differences. She ended up founding her own record label with some help from Karin Dreijer of The Knife. 2005 saw the release of Robyn, a bold statement that switched out the straight pop R&B for songs indebited to synthpop and electro. The album took two full years to reach the United States, but it did re-ignite Robyn's career there.

2010 saw the release of the three-part Body Talk, which cemented Robyn's career as a solidified pop songwriter and a tastemaker (it's telling that Max Martin, who's had a hand in writing and producing a sizable chunk of all of the pop hits of the last 20 years, is handed a copy of Robyn's latest album as a creative starting point when a singer comes to work with him.) Her fanbase extends to celebrities such as Lorde, Carly Rae Jepsen, Perfume Genius and Ariel Rechtshaid, all of whom have cited Robyn's work as inspiration for their careers.

Outside of music, Robyn is known for championing equality and empathy, which has won her a sizable queer audience. She also promotes STEMnote Science, Technology, Engineering and Mathematics education in girls, with her Teklafestival only open to girls aged 11-18 (plus their parents.)