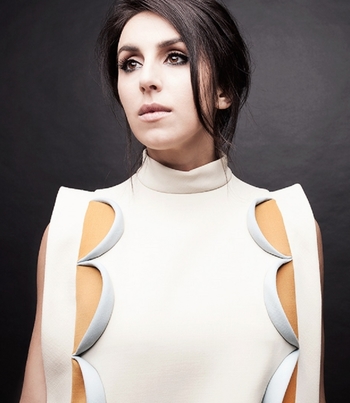 When strangers are coming, they come to your house
They kill you all and say, "we're not guilty"
— "1944"

Jamala is perhaps best known for winning the 2016 Eurovision Song Contest, giving Ukraine their second-ever victory with "1944". The song, which she wrote about her Tatar ancestors being forcefully resettled from Crimea by Josef Stalin in the year 1944, obviously rustled certain feathers, with some arguing it went against the contest's (supposedly) apolitical nature.note And to be fair, the song was written about the plight of her ancestors, specifically her great-grandmother. The reality of the ongoing Crimean crisis with Russia —which partly prompted Ukraine to withdraw from the competition just a year earlier— makes the song uncomfortably topical in The New Tens.

In spite of —or because of?— the controversy, Jamala narrowly beat out entries by Australia and Russia (biblically-appropriately enough), giving Ukraine the privilege to host 2017's contest in Kyiv. "1944" is also the first winning song of the contest to not be sung entirely in English note having sections in Crimean Tatar since the 2007 Serbian entry "Molitva" by Marija Šerifović.

On the heels of her Eurovision win, Jamala joined Holos Krainy as a coach in 2017, which Ukraine's previous Eurovision victor Ruslana also coached in its first season, as well as the jury panel of Vidbir - Ukraine's national selection for Eurovision.