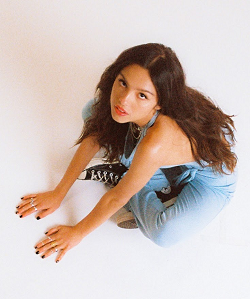 Do you get deja vu when she's with you?
God! It's brutal out here.
Influences:
Advertisement:

Olivia Isabel Rodrigo (born February 20, 2003) is an American singer-songwriter and actress. As an actress, she is known for her roles on the Disney series Bizaardvark and High School Musical: The Musical: The Series, though she made her theatrical debut in the direct-to-video film An American Girl: Grace Stirs Up Success.

She released her first single, "drivers license", in January 2021, which smashed a slew of streaming records and got her a musical guest spot on Saturday Night Live the following month. A follow-up single "deja vu" was released in April 2021, and both songs featured on her debut album SOUR, which was released on May 21, 2021.

Rodrigo is primarily a Bedroom Pop vocalist who incorporates various other musical styles in her songs, many of which center around love and heartbreak.