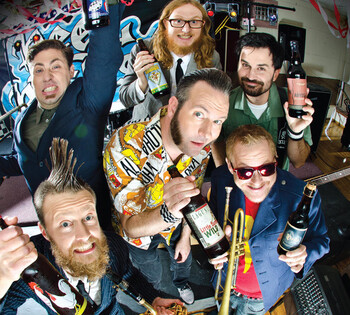 Reel Big Fish is an American ska punk band that, along with groups such as No Doubt and Sublime, are one of the big successes of the Orange County ska scene in The '90s. The group began as a standard Hard Rock trio featuring Aaron Barrett on guitar and vocals, Matt "Mattwong" Wong on bass and Andrew Gonzales on drums, before going through a fluctuating roster of additional guitarists, singers and - after the fledgling band switched from straightforward rock to Ska Punk - horn sections. By the time they got around to recording their first album, Reel Big Fish consisted of Barrett, Wong and Gonzales with Grant Barry and Dan Regan on trombones and Tavis Werts and Scott Klopfenstein on trumpets.

This line-up had a hit single on the Modern Rock Chart with "Sell Out" and recorded two well-received albums; Turn the Radio Off and Why Do They Rock So Hard?. However, after the recording of the second album Tavis Werts and Grant Barry were both sacked and Andrew Gonzales decided to leave. For a second time, the band went through several line-up changes, went independent and continued to record and perform live, at which point Matt Wong left to spend more time with his family. In 2011, Scott left much like Matt Wong did to spend time with his family, and Dan did the same in 2013.

The membership seemed to settle in the mid-2010s after drummer Ryland "Rabbit" Steen departed after nine years with the band, with Aaron as the remaining founding member along with John "Little Johnny Christmas" Christianson on trumpet, Ed "Smokey Beach" Larsen on drums, Derek Gibbs on bass guitar, and Matt Appleton (formerly of Goldfinger) on sax. While not as mainstream as they were twenty years ago, they remain very popular and consistently awesome.