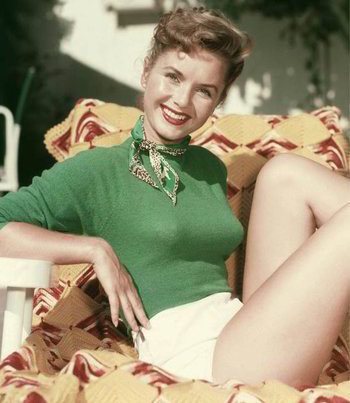 Born poor, she was crowned "Miss Burbank 1948" and discovered by Warner Bros.. When WB stopped making musicals, she jumped over to MGM and starred in a bunch of successful ones. The soundtracks from her films were already charting at this point. Her vocals and acting ability impressed MGM, who decided to give her a starring vehicle in Singin' in the Rain. Gene Kelly was skeptical of her casting due to her age (19) and lack of dancing experience, but she powered through it. A few years later, she provided the soundtrack to Tammy and the Bachelor; its main title theme, "Tammy", became her Signature Song and a permanent staple of her concerts.

During her lifetime, she dealt with public highs and lows. These ranged from an Oscar nomination for The Unsinkable Molly Brown to three bad marriages: Eddie Fisher dumped Reynolds for her recently widowed friend Elizabeth Taylor, causing a media circus. Second and third husbands Harry Karl and Richard Hamlett left her in financial ruin due to their bad investments. Despite these hardships, her nearly seventy-year career in film, television, and stage endured.

She died on December 28, 2016, at the age of 84, the very day after her daughter Carrie Fisher, most likely out of grief. Her last words were "I miss her so much... I want to be with Carrie." The two of them were estranged for over a decade but became close again in then-recent years. There's a good documentary about their relationship called Bright Lights (2016), which was filmed a few months before their deaths.

Films and TV series of her with pages on this wiki include: