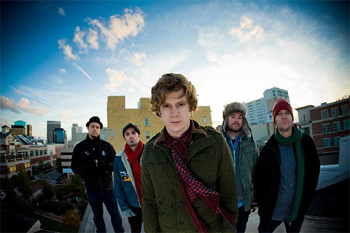 Relient K is a rock band that was founded in 1998 in Canton, Ohio; although their first full-length album was released in 2000.

Starting out, they possessed a distinctly punk-pop sound and have a penchant for quirky lyrics, puns, and pop culture references (early on especially). These days their sound is a folk-alt-rock-punk-something blend. Members Matthew Thiessen (vocals, guitar, and piano) and Matthew Hoopes (backing vocals, guitar) are currently still in the band, with John Warne (more backing vocals, bass) and Jon Schneck (guitar, banjo, bells, yet more backing vocals) having been involved with at least three albums. Former members have included Brian Pittman (bass), Dave Douglas (drums, backing vocals; currently a touring member), and Ethan Luck (also drums).note Warne and Schneck did not participate in 2014's MMHMM 10th anniversary tour; as of Jan. 2015 it is unclear if they are still members or not. As of 2018 both Warne and Schneck are not in the band in any capacity but remain on friendly terms with the Matts.

They are a Christian Rock band, although not always explicitly so, and they have played with both secular and Christian acts.