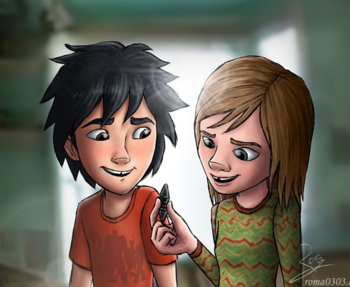 In the city of San Fransokyo, the tech industry is booming since "The Battle in the Bay". Small companies are joining the tech empire Krei Tech, and new families are moving into town for work. One such family are the Andersens, including Bill, Jill, and their daughter Riley.

Unfortunately due to some mental struggles, Riley has had a rough first few days around San Fransokyo, and almost ran away back to Minnesota. However she realized her folly in time, but got lost and stumbled upon a bot fighting match. This chance encounter would eventually entwine her with the life of Hiro Hamada, with new friends, new challenges, and an adventure that would change their lives forever.

is a Fusion Fic crossover between multiple animated franchises by Finmonster. It's the story of how Riley found a new home, how Hiro Hamada found a purpose, and how through empathy, compassion, and care with their friends, they became heroes.

The story would later be followed up with the sequel Unity.

This fic contains examples of