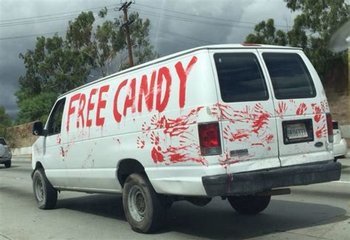 That's not red paint.
Needy: They took her in their spooky van with the windows all blacked out.
Chip: Did you get the model?
Needy: I don't know, Chip! An '89 Rapist?
— Jennifer's Body
Advertisement:

In fiction, unmarked, usually all-white vans are the go-to tool for kidnappers and sexual predators. They're large enough to store a body and generic enough that they can be easily dumped. When asked why they have such a large van, they can have various alibis, such as it being work-related. Vans are also cheap and easy to customize, soundproof, and otherwise secure. While they've become commonly associated with the stranger in the park luring kids with candy, they're also pretty popular among Serial Killers and run-of-the-mill stalkers, thanks to having the extra cargo capacity you need for Vehicular Kidnapping. Even if the driver never kidnaps anyone, watching someone from a van is always creepy, except on those occasions when the Spies In a Van happen to be the good guys.

Not all of these vans are necessarily unmarked, however. Ice-cream trucks are often used for this purpose. You may see a creepy-looking older man trying to rent an ice-cream truck "for some private reasons". Sometimes they even actually are an official ice-cream man who uses their job as a way to get close to kids. Campers or caravans are also not uncommon as a vehicle of choice.

As a result of this trope, characters who have generic-looking vans and caravans often have jokes where they're Mistaken for Pedophile.

Super-Trope to Bad Humor Truck (for ice cream trucks specifically). Compare Sinister Car and Van in Black, for when the van is merely suspicious. Can overlap with Vehicular Kidnapping, though the latter is often played for suspense rather than horror. Or, if the kidnapper has a car instead of a van, see Punk in the Trunk.