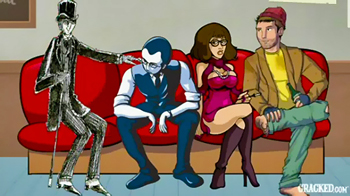 Starting from the left: Soren, Dan, Katie, Michael.
Soren: But we don't have to get into a thing.
Dan: Look around you Soren, we are in a thing. This is us. In a thing.
Katie: Did she hear me say "No raisins"? I mean, she didn't write it down.
Michael: What are we talking about?
Advertisement:

After Hours is a Web Original comedy miniseries produced by Cracked, usually taking place in a diner after the Cracked.com workday has ended. Starring Cracked writers Katie Willert, Soren Bowie, Daniel O'Brien and Michael Swaim as themselves,note Albeit highly exaggerated versions of themselves the series mainly draws humor from discussing and deconstructing various aspects of both modern and nostalgic pop culture.

In late 2017, Cracked laid off 25 writers, including the majority of on-screen personalities in the segments

, killing the series along with every other video series they hosted. A finale was filmed but remains unaired.

called Off Hours, which also features Katy Stoll and a rotating cast.