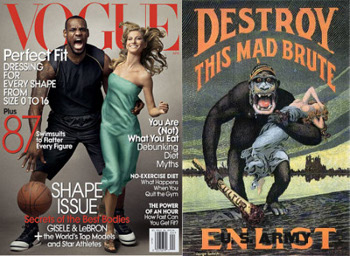 Let's just say Vogue managed to get themselves

.
"I'm amazed sometimes at the subtext that writers don't spot in their own work."
— Diamanda Hagan

The media to which TV Tropes is devoted generally exhibit greater sensitivity now than in the past. Even when authors are being careful with story elements, though, it's impossible for them to know every single person in the world's opinion or how certain tropes may be construed as offensive. Especially when you consider just how diverse human beings really are. When a work's content offends a large enough audience in a way that the author did not expect, you get this.

This is a highly subjective Audience Reaction, and since in the past this page became bogged down in arguments about some tropers believing that concerns about such matters simply relate to Political Correctness Gone Mad, and other tropers—seeing the entire "political correctness" argument as a plausibly deniable defense of racism—vehemently oppose it, no example may be added in this article or on a work article without proof that it's not just one person's thinking. Citations are done as follows:

Keep in mind that Unfortunate Implications are unintentional. An intended offensive message (for example, a piece of Axis propaganda about Jews) does not belong here, nor does natter about the author's true intentions. Also, for something that may not be offensive to you personally but may offend others in a different culture or time period (or vice versa), see Values Dissonance.

To avoid these pitfalls, please see So You Want To Avoid Unfortunate Implications.

Subjects susceptible to Unfortunate Implications include: