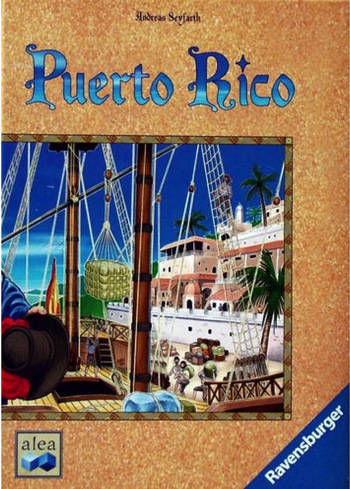 Puerto Rico is a Eurogame by Andreas Seyfarth. Published in 2002, it was once considered the pinnacle of Eurogames. Players assume the roles of colonial governors on the island of Puerto Rico during 17th century. The aim of the game is to amass victory points in two ways: by exporting goods and by constructing buildings.

Puerto Rico can be played by three, four or five players, although an official two-player variant also exists. There is an official expansion released in 2004, which adds new buildings with different abilities that can replace or be used alongside those in the original game. A second, smaller expansion became available in 2009. Additionally, a couple of changes to the rules have been suggested that serve to balance the game.

There is also a card game variant, with complete overhaul of rules. It is officially named San Juan, but on many markets, it's still sold as Puerto Rico.

Tropes occurring in the game