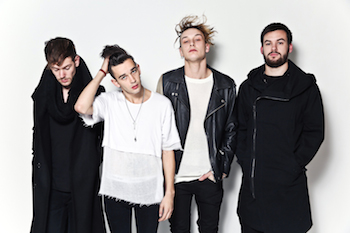 Adam Hann, Matty Healy, George Daniel, and Ross MacDonald.
Go down
Soft sound
Midnight
Car lights
Playing with the air
Breathing in your hair
Go down
Soft sound
Step into your skin? I'd rather jump in your bones
Taking up your mouth, so you breathe through your nose.
"The 1975"
Advertisement:

A four-piece Power Pop/Alternative Dance/Sophisti-Pop/whatever they want to be group, their style has been described by music magazine Paste as “equal parts ethereal and synth pop” with “haunting” and “smooth” vocals. Matty has cited Prince, Michael Jackson, Peter Gabriel, Talking Heads, Sigur Rós, My Bloody Valentine and The Blue Nile as his musical influences, but states his greatest influence is the filmmaker John Hughes. Their lyrics explore discovery and novelty in sex, love, drugs, hope, death, and fear, among other themes.

The band is known not only for their unique and eclectic sound but also for their specifically crafted image in the media. The band requested that all paparazzi photos were shot and released in black and white, and all their music videos up until 'Sex' were black and white as well. According to Healy, this was inspired Hughes-esque juxtaposition of black and white film with major keys and “classic pop sensibilities."

The band began in 2002, when Matthew Healy, son of actors Denise Welch and Tim Healy, met Ross MacDonald, Adam Hann and George Daniel in high school. Through a community organization, they began playing gigs in 2004. Healy was originally the group’s drummer but became the vocalist once George Daniel was recruited.

Some of the group's older work can be found under the names Talkhouse, the Slowdown, Bigsleep, and most prominently Drive Like I Do. Their current name was inspired by a Beat poetry notebook that Healy found on holiday. The book was dated “1 June, The 1975”. Healy states that his attraction to the name was only Rule of Cool.

After almost a decade of playing together, the band released their first EP, Facedown, in August of 2012. Its lead track 'The City' found airplay in the United Kingdom on BBC Radio 1. Their next EP, Sex, had its eponymous track finding great success again. Music For Cars was The 1975’s next EP, released early 2013. The lead single, 'Chocolate,' has garnered the major mainstream success and reached number 19 on the UK singles chart. IV, their final EP, was released on May 20, 2013 and its lead single was a new version of 'The City.'

In the years leading up to and throughout the release of their EPs, The 1975 toured extensively, and supported Muse, The Rolling Stones, and The Neighbourhood. They also played festivals including the 2013 Reading and Leeds Festival.

On September 2, 2013, The 1975 released their self-titled debut album. The lead single was a revamped version of 'Sex.' The album received mainstream success and was greatly acclaimed, debuting at number 1 on the UK Albums Chart.

Most recently, the band played at Coachella 2014 and in the Royal Albert Hall. Their second album was released in 2016, and is titled I like it when you sleep, for you are so beautiful yet so unaware of it. The song 'Medicine' was intended to be the first single from the album, but was later revealed to be just a part of the 2014 rescore for Drive (2011). In mid-2015, the band released the album's first true single, "Love Me". Matty initially declared that the third album would be called Music For Cars in a shout out to the EP, but wound up renaming it A Brief Inquiry into Online Relationships, which was released in 2018. He also announced that there would be another album to be released in 2020, called Notes on a Conditional Form.

ILWYSFYASBYSUOI: Nana & She Lays Down. (How To Draw also counts)

ABIIOR: The Man Who Married A Robot, & Surrounded By Heads And Bodies.

NOACF: Yeah I Know, Streaming, and The Birthday Party.