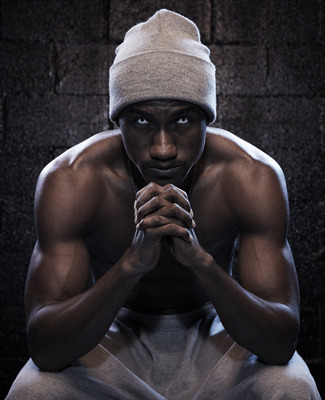 Marcus Jamal Hopson (born July 18, 1985), better known as Hopsin, an alteration of his last name, is an underground rapper who is slowly but steadily growing in popularity.

His style is generally described as angry, cynical and somewhat melodic, and is often compared to early Eminem albums. Hopsin has admitted that Eminem is one of his primary influences, so he seems to be aware of this. He is very critical of mainstream hip-hop's glorification of drugs, alcohol and glamorized gangsta lifestyles, as well as mainstream rappers who use them as part of their act.

In 2009 he released his debut album, Gazing at the Moonlight, which was received quite well. Unfortunately, it was ill promoted by the label, Ruthless Records, and Hopsin was later dropped. His second album, Raw, was released the next year as a digital download on his own label, Funk Volume. In 2013, he released his third album, Knock Madness. He also releases yearly freestyles on his Youtube channel, found here