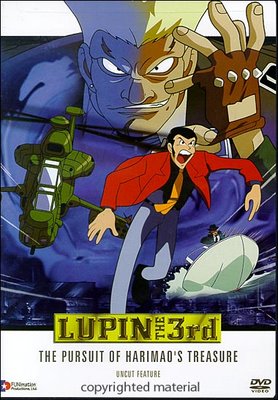 Lupin III: The Pursuit of Harimao's Treasurenote  (Japanese Title: ハリマオの財宝を追え!! Harimao no Zaihou wo Oe) was the seventh of the Lupin III Yearly Specials, first airing on August 4th, 1995. Like the earliest specials, it was storyboarded and directed by Osamu Dezaki, and is his final entry in the Lupin franchise. It is the first Lupin TV special where Kan'ichi Kurita voices the title character (Yasuo Yamada had died a few months earlier). Funimation dubbed and released this special in 2002 as the second entry in their block of Lupin anime.

The plot centers around three statues, an aging billionaire, and a hidden treasure. So it should come as no surprise that Lupin and his gang are out to claim it for themselves. This time, however, they may have met their match, as Sir Archer and his granddaughter, Diana, also have their sights on the treasure. As does The Neo Himmel, a group of neo-Nazis led by Herr Mafroditte.

It begins with a late night heist of a bronze bear statue, followed by the destruction of the Euro Tunnel, which lands Sir Archer, who underwrote the tunnel, over seven billion pounds in debt to Lloyds of London. Despite this outstanding amount, Archer remains unfazed; convinced he can settle the affair by claiming the legendary Treasure of Harimao - with Diana's assistance. At first foils to each others plans, the Archers eventually agree to team up with Lupin and Co. under a tenuous 70/30 agreement. But as the goal draws nearer, allegiances are changed, and it soon becomes a matter of who's playing who.

This TV Movie contains examples of: