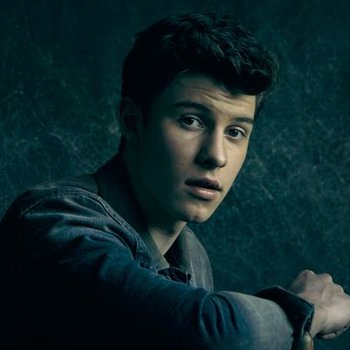 He'll be needing stitches
"His name is Shawn Mendes, he's just your average teen idol, except one little difference: he plays guitar."
—Todd in the Shadows
Advertisement:

Shawn Peter Raul Mendes (born August 8, 1998) is a Canadian singer-songwriter. Mendes first became noticed thanks to his music on social media platform Vine. Not long afterwards, he was signed to his first record deal. Mendes' first hit single was "Life of the Party", which debuted at #24 on the Billboard Hot 100, making him the youngest artist to ever debut in the top 25 (he was 15). His first full-length album, Handwritten, was released the next spring. It produced the smash crossover hit "Stitches", which hit #4 on the Hot 100 and #1 on the pop airplay chart. His second album "Illuminate" was released on September 23rd, 2016. His third, self-titled album was released in 2018, spawning the hit "In My Blood" and netting him his first two Grammy nominations- all while still under 21. Then in 2019, he scored his first Hot 100 #1 with "Senorita," a duet with Camila Cabello, which gave him two hits in the Top 10 at the same time (along with his solo "If I Can't Have You").

Tropes associated with Shawn Mendes include:

BETTER THAN HE CAN!!