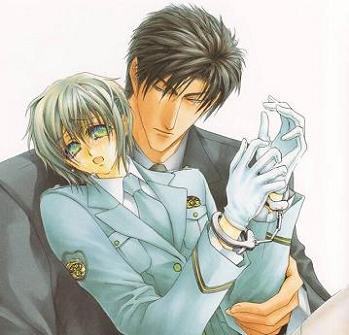 A character associated with the Boys' Love Genre, the Uke (or "Neko" in Girl's Love works) makes up the "receiving" half of a relationship (whereas in real life, sex roles are generally not as rigid as that portrayed in Yaoi and are also not "assigned" according to perceived masculinity). Typically the polar opposite of the Seme, the Uke is sometimes more feminine than his counterpart; just how much "more feminine" this can be varies, from simply looking more childish or "beautiful", or being more emotional and/or blushy or just less overtly macho than his partner, to, on the other end of the spectrum, having outright crossdressing habits. Almost always, the Seme is One Head Taller than the Uke (or at least a few inches). So prevalent is this custom that a well-known (and oft derided) process in Slash Fic is Ukefication, or feminizing one half of a slash pairing to fit this character type regardless of canon characterization. A major draw of the Boys' Love is that you get two hot guys for the price of one, so in the more explicit titles expect to see lots of his cute little bod.

His personality can vary from:

See Boys' Love Notes for a list of standard seme and uke types.

There is a trend of making the Uke more outwardly emotional than the Seme; even an angsty Uke will be more vocal in his angst than an angsty Seme who will just hide it all behind a stoic mask, and emotionless Ukes are relatively uncommon. This is due in large part to the fact that Seme/Uke relationships customarily exhibit a frequently flustered Uke - something much more difficult to pull off if the Uke is the stoic type.

Additionally, the Uke is almost always the more inexperienced one of the pair, if not an outright virgin, to fit with his traditional role as the "receiver" and is often Oblivious to Love, requiring the more experienced Seme to make the first move. However, more sexually experienced ukes are a growing alternative.

Shōnen fandom has popularized another type where the All-Loving Hero or Stock Shōnen Hero functions as the uke, at least physically, where his sheer niceness and adorableness wins over other characters.

Another take on the character, often more common in Bara Genre or fusions between yaoi and bara, is the Ojou uke - a princess-styled male/prince/royalty/other character of wealth and power outside of the bedroom that is the sexually submissive partner in it and who is often known for the "topping from the bottom" and diva approach.

A Lipstick Lesbian, in Yuri, or Girls' Love, who is openly attracted to someone can also take this role. The irony is, a female character who acts or looks openly masculine is actually more likely to be the uke, since this is usually equated with tomboys and immaturity.

Any main character in any anime, movie, TV series, book, or the like can easily be transformed into a helplessly depressed uke by killing off everyone they know and love or putting them through puberty.

Also see Keet, In Touch with His Feminine Side, Masculine–Feminine Gay Couple. Western equivalent is The Twink, although while the twink is more effeminate he is not necessarily either younger or less experienced. Indeed, the twink will often be the more experienced (at least with men) of the two: sometimes in more cynical works because he was forced out of the closet at an early age due to his effeminate mannerisms/dress sense. For all you baseball fans out there: he's the catcher.

Note that this usage of the word originated in the Boys' Love Genre fandom; among "regular" Japanese people it just means "defend". It is also a term used in the Japanese martial arts (especially those based on holds and throws such as judo and aikido) to indicate the person doing ukemi — allowing themselves to be thrown/held by the tori or nage (the partner doing the throwing) and doing so safely. Japanese gay men won't necessarily know the BL meaning of the term (remember, BL is primarily intended for straight women. Actual gay people often avoid this literature because they know it is fetishizing them). Even the Boys' Love Genre itself has evolved and diversified enough with time that even many BL fans these days will simply use "uke" to indicate who is the receptive partner, with little implication regarding their personalities or physical builds (which may diverge heavily from the norms described here). Non-otaku English speakers won't know what it means at all, unless they do judo. English-speaking gay men occasionally find the use of the term as a blanket replacement for the more general "bottom" out of the context of the BL genre obnoxious, feeling that their native language has got that concept covered already.