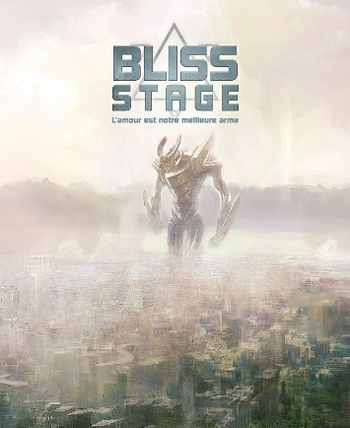 Against an alien mind, we wield the human heart.
Love is our weapon. Trust is our armor.
Against these nightmares, we will not sleep.
- Motto, Treasure Island ANIMa Corps

Bliss Stage: Love Is Your Weapon is the official Visual Novel adaptation of the Tabletop Roleplaying Game Bliss Stage, by Ben Lehman's imprint, These Are Our Games.

The game is being produced by Perpetual Motion Games .

Links to the Mediafires for the public demos for Mac, Windows, and Linux are available here

The main discussion thread on Lemmasoft is here.

The story expands on the events and characters from the one-shot, Final Act, published in the first edition of Bliss Stage. It follows the adventures of Josh Preston, the newest pilot of The Treasure Island Resistance and son of its Commander, Jim Preston. They are fighting a losing battle again an Alien Invasion by the Nightmares, a race of Eldritch Abominations from a dimension adjacent to our dreams.

His weapon? The ANIMa, a reverse-engineered alien device that creates a psychic manifestation of his intimate relationships. But time is running out for him... Bliss happens, and if he drags his feet too long, or acts like a Jerkass, he is going to either die messily or fall to the Bliss.

In addition to the tropes from the main Bliss Stage page, this game and its characters provide examples of: