I Love You, Vampire Son 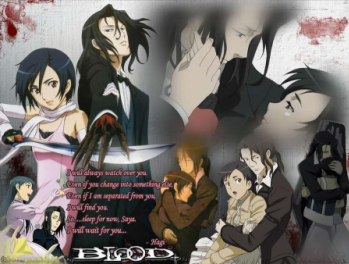 Ahh, being turned into a vampire! It is known across fiction as a fall from grace, the loss of humanity, and rebirth... but also love!

Yes, rebirth and love! Did we mention they lost their humanity?

I Love You, Vampire Son is when there is a romantic — or at least affectionate — relationship between the turner and the turned. This could be mutual or one-sided. Bonus points if it is directly stated that some pairs have a parent-child or mentor-student relationship, yet others are romantically (and physically) involved. Vampires can be that way.

It is often implied that vampires choose who to turn specifically based on romantic attraction. This applies to both good and bad vampires: "I turned him because I wanted him to become my lover," and "I turned him because I wanted us to be together forever." Indeed, vampires of this sort believe that Living Forever Is Awesome and want to share it with their special someone.

Vampires are especially tempted to do this when their beloved is dying, either right now and only an Emergency Transformation will save them; or else they fear being alone once old age runs its inevitable course for the mortal object of their affections.

This is not a trope about vampires having sex with their "traditional" family members, but rather, belonging to the same vampiric bloodline, which is seen as the equivalent of — and often replacing — being related by human blood.

Inversion to I Hate You, Vampire Dad, though one-sided vampire incest can be a source of hatred. Related to Parental Incest and Teacher/Student Romance. Compare Resurrected Romance and Supporting the Monster Loved One.