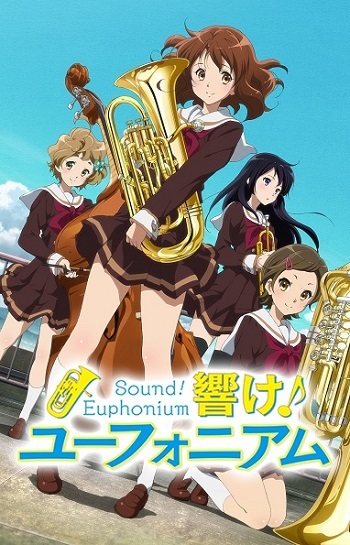 Sound! Euphonium (original title Hibike! Euphonium, and note that "Sound"/"Hibike" here is an imperative verb, not a noun) is a Japanese novel by Ayano Takeda, published on December 5, 2013 by Takarajimasha. The story takes place in Uji, Kyoto, and focuses on the Kitauji High School Music Club, which is steadily improving thanks to the newly appointed adviser's strict instruction. A manga adaptation illustrated by Hami began serialization on the Kono Manga ga Sugoi! Web website on November 28, 2014. An anime adaptation, produced by Kyoto Animation began airing in Japan on April 7, 2015. The anime is directed by Tatsuya Ishihara and written by Jukki Hanada, with Shoko Ikeda serving as character designer and chief animation director, and Naoko Yamada serving as the series technical director.

player from Kita Middle School, visits her high school's brass band club as a first year. Kumiko's classmates Hazuki and Sapphire decide to join the club, but Kumiko sees her old classmate Reina Kousaka there and hesitates, recalling a poignant incident she had with Reina at a brass band club competition in middle school, where they had just narrowly lost their shot at competing in nationals. Still weak to peer pressure, Kumiko ends up joining anyway, and despite her best efforts to at least switch instruments, ends up playing the euph again.

The real adventure begins when the new club advisor, Taki-sensei, brings up the goal of going to nationals. Kumiko worries that it will end up a pipe dream once more.

A recap film of the first season, titled Sound! Euphonium the Movie: Welcome to the Kitauji High School Concert Band, premiered in Japan on April 23, 2016. A second season for the anime premiered in the Fall 2016 Anime season, and covers the two sequel novels. This season also received a recap film, Sound! Euphonium the Movie: May the Melody Reach You, on August 30th, 2017. Additionally, due to the anime's success, the series received two new theatrical films: Liz and the Blue Bird (2018), which focuses on side-characters Mizore Yoroizuka and Nozomi Kasaki, and Sound! Euphonium: The Movie - Our Promise: A Brand New Day (2019), which focuses on Kumiko's second year at Kitauji.