Characters from Sound! Euphonium. Names are listed with the given name before the surname.

Mind unmarked spoilers if you're not finished with Season 2 of the anime!

A first-year student and primary viewpoint character. An euphonium player since age 8 and previously hailing from Daikichiyama Middle School, she joins the music club at Kitauji High School alongside her classmates Hazuki and Sapphire, hoping to try out a new instrument instead of having to play the euphonium. Unfortunately, she gets roped into playing the euph by Asuka and winds up in the bass section.

A beautiful and aloof trumpet player, and Kumiko's former classmate at Daikichiyama Junior High. Reina and Kumiko were in the same music club, but had a falling out after Kumiko accidentally said something insensitive. It's not shown whether she shares classrooms with any other band member at Kitauji.

Another first-year student and classmate to Kumiko and Sapphire. Hazuki was part of the tennis club in junior high, but decided to try something new in high school. She's very enthusiastic about the music club and wanted to play the trumpet. She ends up playing the tuba instead. After not making the cut for Mr. Taki's audition, she becomes part of Team Monaka, the support group for the main concert performers.

Hazuki is the focus of the first season OVA Ready, Set, Monaka, which deals with her experiences at the band after she fails Mr. Taki's audition up until the Kyoto Competition.

Kumiko's classmate and fellow first-year hailing from the wealthy Seijo Junior High School. She doesn't really like her name and prefers to be called Midori. She joins the Kitauji concert band club with Kumiko and Hazuki, picking the contrabass.

A third-year student and the the president of the concert band club. She plays the baritone saxophone, she is the leader of her section, making her in charge of Aoi, and she is a classmate of Asuka.

The third-year vice-president of the concert band club. She plays the euphonium and is responsible for roping Kumiko into joining her section. She is a classmate of Haruka and the Bass Section leader, making her in charge of Kumiko, Midori, Hazuki, Gotou, Riko and Natsuki.

The third year Trumpet Section leader and the club's treasurer. She is thus in charge of her juniors Reina and Yuuko. It's not known whether she is a classmate of any other band member.

A second-year trumpet player who admires Kaori. A former bandmember of the Minami Public Junior High School band and one of the few former Minami students that didn't quit the Kitauji High band. She is Reina's section mate and rival of sorts. It's not shown whether she is a classmate of any other band member.

A withdrawn second-year euphonium player. Her lack of enthusiasm in the club is implied to be a side-effect of the incident in the previous year that caused half of the first-years to leave. She also hails from the Minami Junior High School, though she didn't belong to the band then, having just started playing the euph just a year before. She shares classrooms with Nozomi and Mizore. She is one of the titular second-year members of the support Team Monaka (her being the Nakagawa in Monaka).

A second-year tuba player in Asuka's bass section. Alongside his girlfriend Riko, he is an informal second-in-command at the section behind Asuka.

The other second-year tuba player in the bass section and Gotou's girlfriend, who takes on a coaching role for her junior section members.

A first-year student and Kumiko and Aoi's childhood friend. He lives in the same building as Kumiko, though they seldom commute together and have few common friends. In middle school, he played the French horn, but in high school, he chose to switch to the trombone.

A third-year student and Kumiko's other childhood friend. She plays the tenor saxophone and presumably played lead before quitting the band. 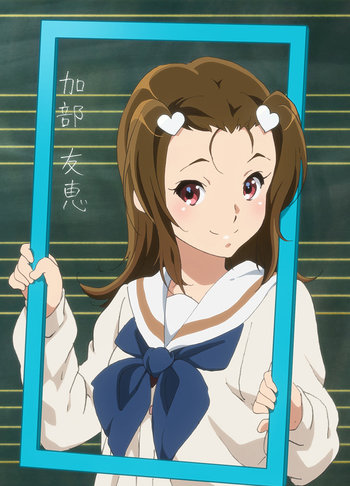 A second-year trumpeter and a personal friend of Natsuki and Yuuko. After she fails the auditions, she becomes the leader of Team Monaka, of whom she is one of the titular second-year members (her being the Kabe of Monaka). She eventually plays a somewhat more prominent role in the movie Chikai no Finale. 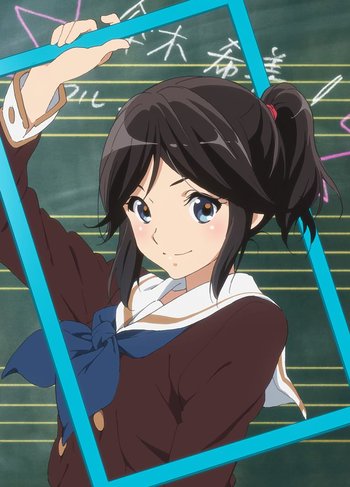 Nozomi is a 2nd year student and the leader of the Minami Junior High School former alumni faction that quit the band en-masse on the previous year. She was previously the president of the Minami School concert band, where she played the flute. She was also a close friend of oboist Mizore Yoroizuka, and she is her classmate alongside Natsuki. Though she appears sporadically in the first season, her formal appearance and arc takes place during the second season.

Nozomi, alongside Mizore, is the protagonist of the movie Liz and the Blue Bird, which takes place on the year after the events of the main series. 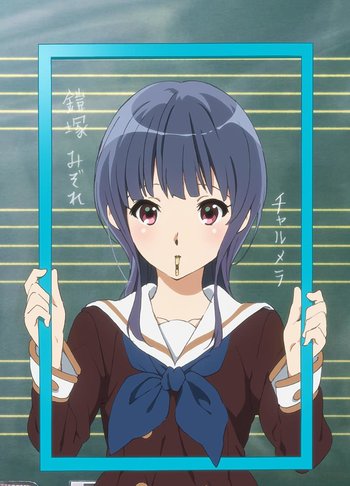 Mizore is a 2nd year student, and the Kitauji concert band's only oboist. A former student and concert band member of Minami Junior High School, Mizore is painfully shy and reserved. She is a friend of Yuuko and was a close friend of Nozomi Kasaki, being her classmate alongside Natsuki. Like Nozomi, Mizore appears in the first season with no spoken lines, becoming more prominent in the second season.

As stated on Nozomi's entry, Mizore is also a protagonist of the movie Liz and the Blue Bird, being the lead soloist for the year's musical number.

A first-year oboist and newcomer to the wind section. First appearing in Liz and The Blue Bird, she's known for her lackadaisical personality, she's a dutiful admirer of Mizore and wants to be her friend.

A first-year euphonist and newcomer to the bass section. First appearing in Chikai no Finale, she's a confrontational and snappy understudy and foil to Kumiko.

A first-year tuba player and newcomer to the bass section. First appearing in Chikai no Finale, she's a towering, serious and no-nonsense member with loner tendencies. She's been a childhood friend of fellow section member Satsuki.

A first-year tuba player and newcomer to the bass section. First appearing in Chikai no Finale, she's a small, bubbly and friendly girl who strikes a quick friendship with Hazuki. She's been a childhood friend of fellow section member Mirei, striving for her to integrate with the section more.

A first-year contrabass player and newcomer to the bass section. First appearing in Chikai no Finale, he's Sapphire's understudy and admirer who has a height complex and resents being seen as cute or immature.

The new music teacher and advisor of the music club. A former trombonist and the son of famed conductor and former Kitauji music director Tohru Taki, he is the homeroom teacher for class 2-5 in the novels. Though he replaced Mrs. Rikako altogether in the anime as the music teacher, in the light novels he's her temporary replacement during her maternity leave. He's polite, but doesn't seem to be very involved in the club at first.

Mr. Hashimoto is a professional percussionist and a former student of Kitauji. He is a close friend of Mr. Taki who used to be under the conduction of Mr. Taki's father in high school alongside Mr. Taki's wife; he is hired to assist him in the band. 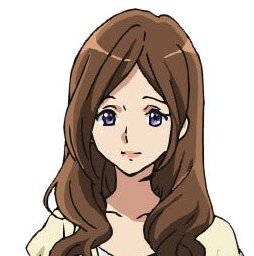 Mrs. Niiyama is an instructor hired by Mr. Taki to assist him with the instruction of the woodwind section. She was Mr. Taki and Mr. Hashimoto's underclassman and close friend at college. 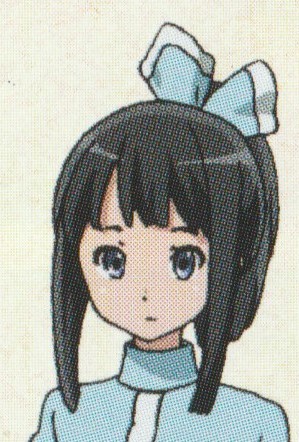 Azusa is a former classmate and bandmate of Kumiko, Reina and Shuichi in the Daikichiyama Kita middle school. She is now a member of the Rikka High School Band playing the trombone, and the only former bandmate that Kumiko keeps in contact with. She is the protagonist of the spinoff light novel Sound! Euphonium Series: Welcome to the Rikka High School Marching Band Prequel, a story shown from the perspective of her concert band.

Mamiko is Kumiko's older sister. She's a third year college student who often visits her family home. She has a cold relationship with both her family and Kumiko. She attended an unspecified high school where she used to be a concert band trombonist.