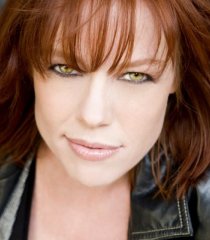 Tropes associated with her characters

"Enough talk and excuses! You're a disgrace. Now sleep for ALL eternity!"