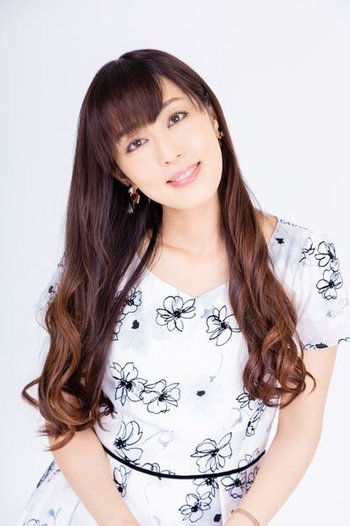 Yōko Hikasa (born July 16, 1985) is a seiyuu from Kanagawa. After watching Sailor Moon, she was inspired to become a voice actor and eventually attended Nihon Narration Engi Kenkyūjo. She has a beautiful, energetic singing voice and typically plays mature, composed female characters, femme fatales, or Tsundere. Although she also lends her talents towards giving voice to manipulative or obnoxious characters.

In September 2014, she released her first album titled Couleur.

Satsuki Yukino was typecast into almost the same roles as her in the early to mid 2000s.

that she got married in 2015. Congratulations!

Yōko Hikasa and her works provide examples of:

"Pawns are important, so keep working as long as you have a job to do."