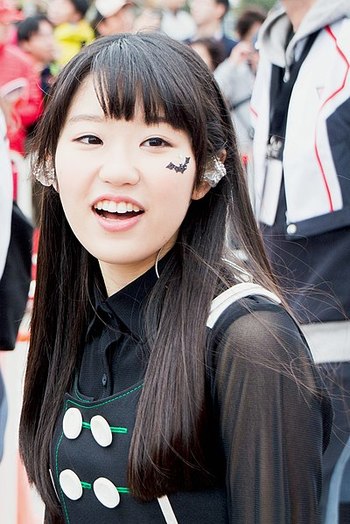 Do not ignore her unless you want to get tazed.
Um... Is the microphone's volume good? Check, 1, 2... Alright, describe Lucky Nao Touyama here, de~su!
Wa-wakaru wa!
Advertisement:

Nao Touyama (born March 11, 1992 in Tokyo, Japan) is a seiyuu. Her breakout role was Kanon Nakagawa in The World God Only Knows, which is extremely notable in that she also released her first album (as Kanon's voice actress) because of the show.

However, her definitive role, the role that has more or less made her career and what most fans in Japan will identify her with today, is her role as Lyria, the god-summoning female lead of Granblue Fantasy. As she appears in some form in every single event and story chapter, she has recorded hundreds, maybe thousands as of The New '20s, of hours of Lyria content, is a regular host for and participant in radio and stream events for the franchise, and has recorded multiple image songs in the character of Lyria. She is a cornerstone of GBF's promotional material and image, and always makes time for GBF content ahead of other jobs.

Her other cornerstone role lies in another mobile game, but this one of no less fame: she is the voice of a number of the ships in KanColle, but she's particularly known as the voice of the Kongou, who is something of a de facto mascot ship-girl for the franchise. While she's still very famous for her exploits in KanColle (see below for an example), in terms of sheer scope, this role still takes second place to her exposure as Lyria.

She can speak conversational English aside from Japanese, which she learned from her father when he returned from overseas when she was young. Though she admitted in radio show interviews that she sometimes has trouble using English, especially as time goes on and she doesn't have as many opportunities.

These roles are full of BURNING LOVE!:

Tropes found in her voicework: 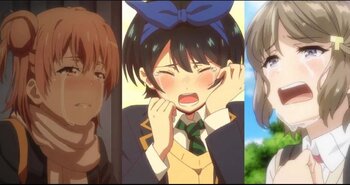 Had you became the self insert romance main character, you could save these characters from being rejected in love. Not Pictured: Chitoge, who becomes the main character's canon love interest.