Manga / How Heavy Are the Dumbbells You Lift? 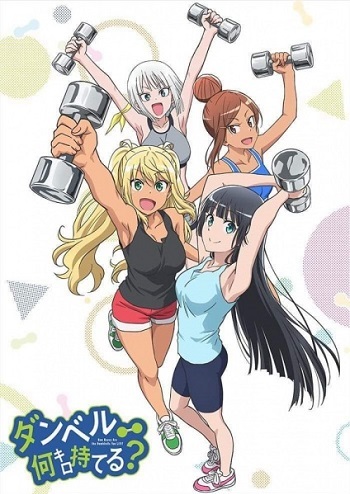 From top to bottom: Gina, Ayaka, Hibiki, and Akemi.
Advertisement:

How Heavy Are the Dumbbells You Lift?, also known as Danberu Nan Kilo Moteru? in Japanese, is a manga series written by Yabako Sandrovich and illustrated by MAAM. The series has been serialized on the Ura Sunday website and the MangaONE app since 2016. The series has sixteen volumes.

Hibiki Sakura has gotten fat! Worried that her life as a beautiful maiden is over, Hibiki thinks about joining the brand new Silverman Gym in order to lose some weight. While going on a tour, Hibiki meets her schoolmate Akemi Souryuin, who is also looking to join the gym.

Thinking that this gym must be full of beautiful people like Akemi, Hibiki wonders if she will finally find a boyfriend. Unfortunately for Hibiki, Silverman Gym seems to be full of nothing but hardcore macho men, except for the very handsome personal trainer Naruzo Machio. Instantly smitten, Hibiki joins and begins her quest to lose some weight.

An anime adaptation aired from July 3, 2019 to September 18, 2019. The anime was produced by Dogakobo and is licensed in North America by Funimation.

See also Kengan Ashura, which is written by the same author but with a different illustrator, and tonally darker and more action-packed than this series.

Tropes present in the work:

Alternative Title(s): How Heavy Are The Dumbbells You Lift