Manga / How Clumsy you are, Miss Ueno 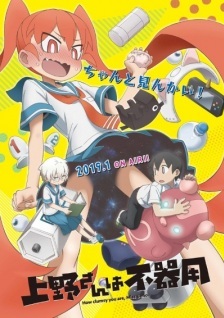 Ueno: [referring to her purified urine] You dumb sonofa... of COURSE I want you to drink this!
(beat)
Tanaka: But why?
Advertisement:

Ueno is a genius student with red twin tails, who creates various schemes and ploys involving her inventions to get the attention she wants from Tanaka, who she has a huge crush on, but one she does not dare to admit. Too bad for her, saying he does not really pick up on her crush is an understatement. Due to the sheer insanity and wackiness of these schemes and characters, Hilarity Ensues.

How Clumsy you are, Miss Ueno (Japanese: 上野さんは不器用, Ueno-san wa Bukiyou) is a manga series written and illustrated by Tugeneko, which was serialized in Hakusensha's Young Animal magazine from February 27, 2015 to March 24, 2022. An anime adaptation consisting of 12 episodes aired from January 6, 2019 to March 24, 2019, and is licensed for English release by Sentai Filmworks.