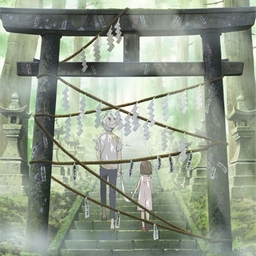 "I first met him when I was six years old. On a scorching hot summer day, in the forest that legend says is home to many spirits and monsters, I got lost. I ran everywhere, trying to find the way out, and I quickly got tired. Because of fear and loneliness I began to cry, and then... He appeared."
—Hotaru Takegawa
Advertisement:

Hotarubi no Mori e, which translates to Into the Forest of Fireflies' Light in English, is a manga containing several one-shots by Yuki Midorikawa. The main story (the second chapter of the manga) was adapted into an anime film in 2011.

Six-year-old Hotaru Takegawa (Ayane Sakura) is visiting her grandfather's house over the summer when she gets lost in the Yamagami Forest and meets a youkai named Gin (Kōki Uchiyama). Gin and Hotaru develop a fast friendship—with Hotaru visiting Gin every summer from when she is a child to when she begins attending high school—and this friendship eventually blossoms into love. However, Hotaru is carefully reminded by Gin, as well as the other youkai that dwell in the forest, not to touch him because his curse: if Gin is touched by a human, then he'll disappear forever.

The other one-shot stories are Overhearing a Flower Song, The Following of Autumn Leaves, and Deepening the Scar. They, along with Into the Forest of Fireflies' Light, each notably represent a season.

The anime film adaptation is directed by Takahiro Omori and is produced by Aniplex and Brains Base.

The other one-shot stories contain the following tropes: