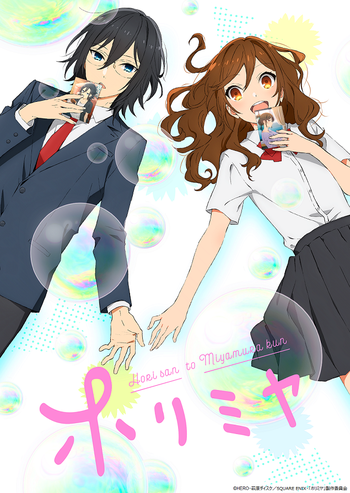 Kyouko Hori may seem like a normal teenage girl, but she's a completely different person after school. In her workaholic parents' absence, Hori has been like a parent for her little brother since she was young herself. Between taking care of her brother, feeding them both, and housework, she doesn't have much time for a usual teenage social life. One day, she meets someone else who does not present his true self at school: a quiet, glasses-wearing boy called Izumi Miyamura. She'd assumed he was bookish, and possibly an otaku, but Hori couldn't have been more wrong. Outside of school, Miyamura is a friendly guy with many piercings, and he's not very good at academics. Now the two of them have someone with whom they can share both halves of their lives!
Advertisement:

Horimiya is a 2011 Manga series that was adapted from the 2007-2008 webcomic Hori-san to Miyamura-kun. It was serialized in Monthly G Fantasy with story by HERO (the author of the webcomic) and art by Daisuke Higawara, ending at 16 volumes in 2021. The original webcomic was later published in book form from 2008 to 2011 at 10 volumes and was adapted into an Original Video Animation titled Hori-san to Miyamura-kun -Shingakki- in 2012; five other OVAs followed in 2014, 2015, 2018 and 2020. A Sequel featuring side-stories titled Hori-san to Miyamura-kun Omake is still being serialized on the author's website, with it also getting a print run and currently sits at 15 volumes.

An Animated Adaptation was announced and released in January 2021, with animation duty handled by CloverWorks. Meanwhile, a live-action television series was broadcast in February and March 2021.

The series is published in English by Yen Press.

Tropes applying exclusively to the original Hori-san and Miyamura-kun and Omake: