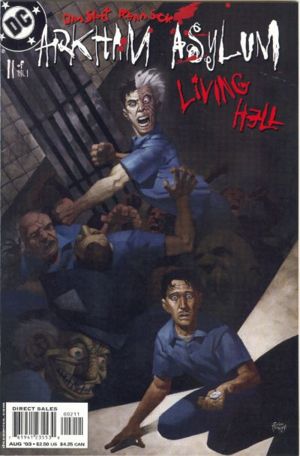 Arkham Asylum: Living Hell is a six-issue limited comics series, published in 2003 and set in the Batman universe. It was written by Dan Slott and features art by Ryan Sook, Wade Von Grawbadger and Jim Royal. Like many mini-series, it has since been collected into a TPB. The series presents us with an inside look on day-to-day life in Gotham's infamous madhouse. The result is basically Oz with supervillains.

Batman does show up a few times in the story, but his role in it is tangential at best. The series actually focuses on two entirely new characters.

The first is Warren White, an embezzler who pleaded insanity and got sentenced to Arkham. Initially, he smugly believes that he got the better end of the deal by avoiding a prison sentence. As he gets to know his fellow "patients", however, he realizes that this is very much not the case.

While all this is going on, security guard Aaron Cash is trying to cope with a near death experience and a devastating loss. Unfortunately, it's very difficult to do that and keep Batman's Rogue's Gallery in order at the same time. Batman might catch them, but Aaron has to live with 'em.

What neither man realizes is that the entire asylum is about to become a part of something very, very horrifying; and that they'll both have to work together in order to come out of it alive.

Definitely not to be confused with Arkham Asylum: A Serious House on Serious Earth by Grant Morrison and Dave McKean, although both books were used as source material for a certain critically acclaimed video game.