Manga / In the Heart of Kunoichi Tsubaki 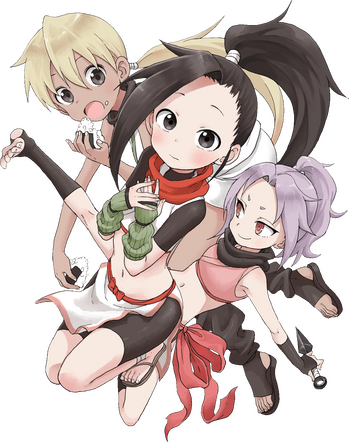 "Men are horrible. Things to be feared. But, why is it? Why is my heart beating so fast?!"
— Tsubaki
Advertisement:

In the Heart of Kunoichi Tsubaki (Kunoichi Tsubaki no Mune no Uchi) is an ongoing comedic Slice of Life manga series written by Sōichirō Yamamoto (creator of Teasing Master Takagi-san and When Will Ayumu Make His Move?). It began serialization in Shogakukan's Monthly Shonen Sunday in 2018.

The story follows Tsubaki, a young kunoichi and the top student of the Akane Class, an isolationist group of kunoichi who forbid any sort of interaction with men. Unbeknownst to anyone else, she harbors a deep curiosity about them that she must keep hidden. Will she adhere to the rules of her class or will her curiosity get the better of her?

An anime adaptation directed by Takudai Kakuchi was announced on November 8, 2021 with production being handled by CloverWorks. The series was licensed by Crunchyroll, and aired from April 10 to July 3, 2022. The series can be watched here.

In The Heart of Kunoichi Tsubaki contains examples of: