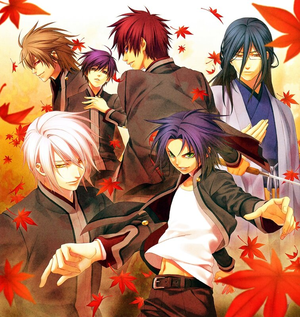 Hiiro no Kakera (Scarlet Fragment) is an Otome game series developed by Otomate, which has been adapted into an anime television series by Studio DEEN as well as a one-volume manga.
Advertisement:

The story starts when a young girl named Kasuga Tamaki is summoned by her grandmother to the small village where she lives. Things turn weird immediately when strange creatures appear before Tamaki in the woods. Well, it turns out that the women in Tamaki’s family are basically in charge of protecting the world and Granny feels that it's time to pass the torch to Tamaki. Not to worry though as she has got a little help; namely a magical little fox and several young men from the family whose ancestral duty is the protection of the Tamayorihime. Yes, this is a Shoujo series, how did you guess?

Unfortunately for Tamaki, she barely has time to settle into her new surroundings when Logos, a Germanic secret society, rolls into town. Their members are powerful, they want the local Artifact of Doom and they are willing to kill anyone who stands in their way; including Tamaki. So it looks like Tamaki is about to get a lot of on-the-job training.

The anime series has been licensed by Sentai Filmworks in North America.