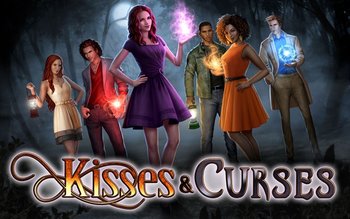 Start your journey as a young Witch in the peaceful but uneventful town of Werbury, Vermont. As the Stargazer, it is your role to absorb infrequent bursts of Wild Magic known as Starfall.

Despite your magical heritage your life is pretty ordinary… until an increase of Starfalls known as Starfloods start to plague the world. You are approached by a mysterious member of the Witch Council who says that only a ritual involves you, a human and another Witch can calm the source of Starfalls.

Love Interests include Rhys, a witch councilman from Wales; Ty, the friendly boy next door; Niklas, a Tall, Dark, and Handsome witch from Europe; Anastasia, a sweet and shy but deadly witch hunter; and best friend and fellow witch Melanie.