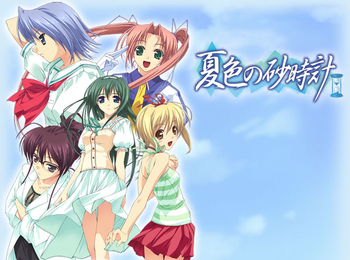 From that first moment I wanted to protect you...
Advertisement:

At the end of the school year, Kotaro Makimura resolves to confess his love to his crush, Kaho Serizawa, and plans to become her boyfriend by the end of summer vacation. On the way home from school, he runs into a cloaked stranger and accidentally gets covered with a mysterious powder. When he wakes up the next morning, he is shocked to find that it is the first day of September. As he returns to school, his friends tell him that his girlfriend Kaho has died in a traffic accident. But wait! He hasn't even spoken to her yet! And why is the second term suddenly started up when summer break was supposedly just around the corner?