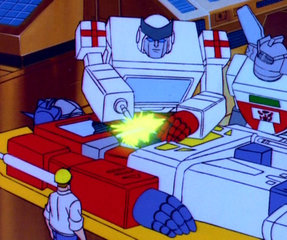 "You blew a gasket again?! Optimus, you needed that!"
"Primum nil nocere." note First, do no harm.
— Often wrongly attributed to the Hippocratic Oath but nonetheless a medical maxim in its own right
Advertisement:

Funny thing about adventure; people tend to get hurt, especially the heroes. Injuries are terribly inconvenient for questing, resulting in time lost recuperating (or making an out-of-the-way trip to the nearest Trauma Inn) at best, and a Total Party Kill at worst. So it's wonderfully convenient to have someone in the party who can make the hurting stop.

Enter the Medic. In modern or futuristic settings, the Medic is often a trained physician or EMT (emergency medical technician) and relies on whatever medical technology is available in that era and on-hand—anything from miraculous herbs, injections and bandages to Nanomachines. In fantasy settings, the Medic is a often a cleric or Mysterious Waif of some kind, using the powers of a White Mage or White Magic to restore people with Healing Hands (or something similarly glowy). They may also wield the Healing Shiv. Even the Standard Scifi Fleet might have Medics, in the form of tenders or repair ships.

Often caring and concerned, Medics tend to be The Chick or (if a guy) The Heart. Alternatively, they're less personable than rational, and they are thus a Smart Guy, even if The Team already has a Smart Guy. Regardless, team Medics will inevitably become the Team Mom —they simply leave the team if they can't. Regardless, everyone must obey the Doctor's Orders.

Medics are typically Squishy Wizards, possessing little in the way of raw strength or offensive combat ability. In most real life cases, this is more specifically because they are forbidden to carry assault weapons or engage in combat, even though all soldiers get the same basic training, regardless of role. If guns are standard, they'll usually have the smallest and weakest possible. In fantasy settings, they don't usually wear any armor, and tend to use staves as often as hammers or maces. They don't always get the flashiest abilities and their skillset tends towards Boring, but Practical, although they will occasionally pick up a few offensive spells. Holy Hand Grenade is popular among the rare Medics who fight.

Expect the Medic to be an Actual Pacifist and hold to Thou Shalt Not Kill (except, possibly, Mercy Killing), although he may not stick to it when he is literally the only person who can attack—especially not if the villain is willing to attack him or worse, the wounded. In Real Life, this is required; medical personnel are non-combatants, and so are protected under The Laws and Customs of War, but forbidden to fight themselves lest they forfeit this protection.note Medical personnel are allowed to defend themselves or their patients, but cannot initiate offensive action. See Article 22 of the Geneva Conventions

If there's only one team member capable of healing, that person is automatically the Medic, even if they have other abilities, even if healing is their least proficient ability. If multiple teammates can heal, then the Medic is the one who is either the best at it or takes it most seriously. Even if the Medic should have awesome attack magic, or have the fortitude to handle melee combat, his role as healer, supporter, and protector is his top priority.

Be wary of pissing off the Medic on your side—you do not want to be in the situation where they decide that actually they don't feel like healing you right now because of something you said earlier. Hence the many variations on the phrase of "Never mess with the White Mage" in the communities of any multiplayer game, from tabletop RPGs to shooters, that have this class. If this does happen, it can cross into Laser-Guided Karma or even Death by Irony.

A subtrope of Support Party Member. See the The Squad and the Command Roster for Ensembles likely to have a team Medic. In particularly large or specialized teams, it is not uncommon for the Medic to do almost nothing except heal the Stone Wall—in which case they are that fighter's "backpack" (this is standard practice for groups in World of Warcraft). A backpack may also occur when one member has a specialized healing ability and another requires that specialized healing (typically robot/techie, The Undead/necromancer, or an inverted Revive Kills Zombie situation).

A Medic who specializes in healing and support magic (sometimes with a dash of attack magic) is known as a White Mage. White Magician Girl is a specific type of White Mage that occurs with faithful regularity in videogame RPGs.

Also in videogames, when the enemy has one, Shoot the Medic First. The Combat Medic is a variant which can heal and support while beating down the enemies, and a medic who specializes in both healing and defense is often a Barrier Warrior. The Deadly Doctor has gone rogue and decided to use those same healing abilities to take people apart. Compare After-Action Patch-Up, After-Action Healing Drama.