Comic Book / The Transformers: More Than Meets the Eye 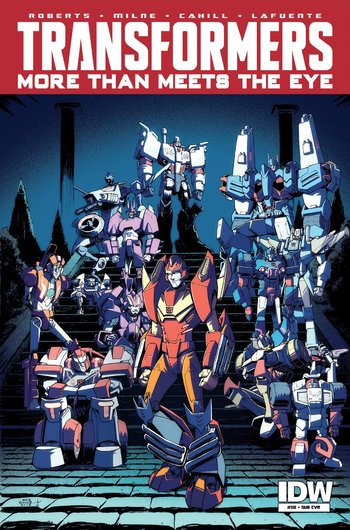 Let's make this precious...note Characters, starting from the top going down: Megatron, Ultra Magnus, Whirl, Cyclonus, Brainstorm, Skids, Tailgate, Nautica, Rodimus, Chromedome, Rewind, Ratchet, and Swerve... oh, and Rung is there too.
And we sail out on orders from him but we find
the maps he sent to us don't mention lost coastlines
Where nothing we've actually seen has been mapped or outlined
And we don't recognize the names upon these signs
And every night finds us rocking and rolling
On waves wild and wide
Well, we have lost our way, nobody's gonna say it outright
— Okkervil River, "Lost Coastlines"
Advertisement:

On the planet Cybertron, the four-million year civil war between the Autobots and Decepticons has just come to an end. The democracy-promoting Autobots were victorious and have set to work rebuilding the society that was lost through the war. This victory came at a cost; the Matrix, an ancient life-giving artifact, was depowered in the final battle, rendered an empty shell. However, inspection of the shell revealed that the Matrix contained a mysterious star map. Enter Rodimus, a young upstart Autobot commander who, in defiance of High Command, decides to leave Cybertron on a quest. Rodimus and his third-in-command Drift believe the Matrix Map will lead to the Knights of Cybertron, an ancient order of warriors that legend claims gave civilization to the galaxy.

For this quest Rodimus seeks a mighty band of soldiers, philosophers, scientists, and heroes. Instead a ragtag collection of expendables, no-hopers and other misfits join out of desperation, by complete accident, for the sheer fun of it, or in the hope of actually doing something meaningful with their lives. They leave on the starship Lost Light to follow the map and bring a new golden age to the galaxy. Along the way, they encounter numerous mysteries, horrors, and strange occurrences, all the while unaware that they may be heading towards horrible forces from before recorded history...

An ongoing comic series set in IDW's Transformers Universe that began in 2012. The comic is a sequel to a previous ongoing (though that comic doesn't need to be read in order to understand this one) and runs concurrently with The Transformers: Robots in Disguise, a comic set on Post-War Cybertron. The series is written by James Roberts, who was brought on after the success of The Transformers: Last Stand of the Wreckers. Artist Alex Milne draws the series, with an occasional fill-in by Nick Roche and other artists. "Season 3" sees the title re-titled as The Transformers: Lost Light, with Jack Lawrence on art.

From November 2013 to March 2014, More than Meets the Eye was part of a 12-issue Crisis Crossover event with Robots in Disguise called The Transformers: Dark Cybertron. Following the end of the event, several new characters joined the Lost Light crew, including a disillusioned Megatron who may or may not still be evil. The series concluded in late 2018 ahead of the end of the IDW Transformers universe shortly thereafter.

In a rather unique touch, this comic has a soundtrack which can be listened to here.

All spoilers up to the end of Season 1 will be unmarked.

Hell-kzzk!
Hello...? Can anybody hear me?
It's-kssk! of the Lost Light.