Nightmare Fuel / The Transformers: More Than Meets the Eye 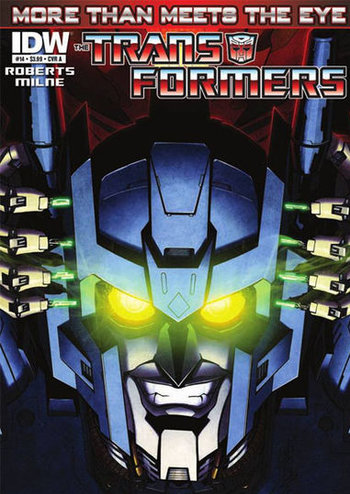 "Run as fast as you can, Chromedome... you're already too late."

Misfire: "You know, there are some Decepticons who, upon finding themselves in a skin-covered room surrounded by aborted protoforms and mechanoids made of bark, would rub their hands together, marvel at the universe's infinite capacity for surprise and dive right in. I am not one of those Decepticons. I say we run away screaming."

To those that've stayed away from recent Transformers media, The Transformers: More Than Meets the Eye may seem like just another kid's comic based on incredibly toyetic robots. Is it?

Possibly the scariest part is the fact that all we get to see is Overlord looming over Rewind before cutting over to the outside of the ejected cell. The fact that we have no goddamn idea what is happening in there, especially seeing as this is Overlord we're talking about, makes it much, much worse than if it were directly shown.

MTMTE One-Shot - Nothing Will Ever Be The Same Again