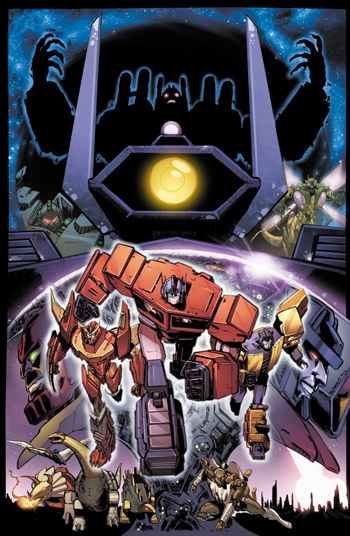 The final cataclysm is at hand... at my hand.
Advertisement:

Dark Cybertron is the IDW 12-Issue Crisis Crossover event of 2013-2014 for their Transformers Series, More than Meets the Eye and Robots in Disguise.

On Cybertron, the political turmoil that has become commonplace in the lives of its inhabitants is put aside as emotionless mastermind Shockwave summons a massive, undead Metrotitan from the bowels of Crystal City. Starscream, now ruler of New Iacon, sends a desperate plea for help to those he hopes may yet survive beyond the stars...

In the depths of space, the Lost Light rescues Orion Pax and his team from the collapsing Gorlam Prime. After a brief concurrence, the crews split up to deal with two unfolding crises. Orion and Rodimus lead a team into the Dead Universe through the portal created by the planet's destruction to thwart ancient despot Nova Prime's plans for conquest, while Ultra Magnus and the Lost Lighters heed a cry of help from the mighty Metroplex. Little do any of them know that Shockwave's influence runs deep... and none of them suspect the terrifying scale of his true plan.

The 12-issue series is co-written by John Barber, of RID, and James Roberts, of MTMTE, with art by several artists, including Phil Jimenez. The relevant characters can be found here and here.

It is followed by The Transformers: Windblade mini-series which deals with the aftermath of the events in Cybertron.