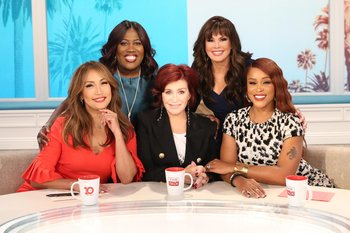 The panel in 2019, from left to right: Carrie Ann Inbaba, Sheryl Underwood, Sharon Osbourne, Marie Osmond and Eve
The Talk is a daytime talk show which debuted in October 2010 and airs weekdays on CBS. It is hosted by a panel of five celebrities who engage in news commentary, celebrity gossip, and newsmaker interviews. The show was created by actress Sara Gilbert, who also serves as an executive producer, along with John Redmann. The show is based on the British daily women's panel show Loose Women, which has been running regularly in the United Kingdom since 1999. The start of the show's ninth season saw the announcement that Julie Chen had left the show; Gilbert took the moderator's chair, and Carrie Ann Inaba officially became a full member of the panel on January 4th, 2019. Three months later, on April 9th, Sara Gilbert announced she was leaving the show, and at the beginning of the next season, Marie Osmond joined the remaining ladies as a co-host. Osmond left at the end of the season in the summer of 2020. Sharon Osbourne was the last original co-host to leave in March 2021. She was replaced by Jerry O'Connell in July 2021. Natalie Morales joined the panel in September 2021.

It's always the right time to name those tropes: