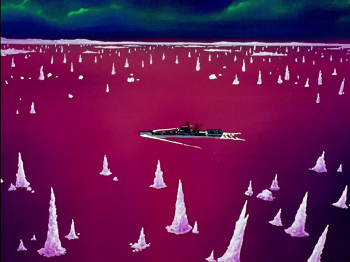 Sailing on stranger tides.
Dax: If you ask me, the seas could be a little more purple.
Kira: Funny, I was just thinking they weren't green enough.
Bashir: I guess it's true what they say. There's no place like home, no matter what color the water is.
— Star Trek: Deep Space Nine ("Past Tense")
Advertisement:

One of the quickest, easiest ways to establish an alien world as being very unlike Earth is to make its "water" some wacky color, or give it some other unusual features or appearance. It's not always explained exactly what kind of chemicals or minerals are causing it to look this way, but regardless, it's still perfectly able to support the native flora and fauna (though that doesn't mean it is safe for Earthlings).

See also Alien Sky, which serves the same purpose and may accompany it — the Earth's oceans are the same color as the sky due to similar refraction, so if the sky and sea don't match you must be someplace exceptionally alien. Alien Landmass is another sister trope, often used for the same reasons.

Compare Waterfall into the Abyss. Contrast All Planets Are Earth-Like.