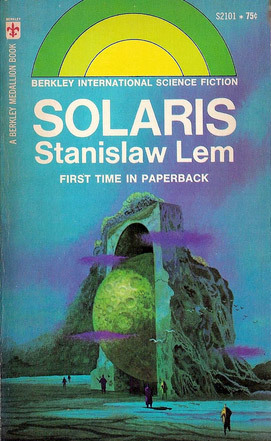 Solaris is an 1961 Science Fiction novel by Polish author Stanisław Lem. The main theme is whether humans are able to communicate with a truly alien (but benign) intelligence, or would it prove too much for the fragile human psyche.

The title refers to a distant planet, which is covered with an ocean of plasma. More than a century before the events of the novel, Earth scientists discovered that the entire ocean is one living, intelligent organism; however, every attempt to establish communication with it was futile.

At the beginning of the novel, psychologist Kris Kelvin (the narrator of the story) arrives to Station Solaris, a scientific research station hovering near the surface of the planet. He discovers that the leader of the research team, Gibarian killed himself, and the other two members, Snow (Snaut in Polish) and Sartorius are acting strangely. He soon realizes why, when a Doppelgänger of his dead wife, Rheya (Harey in Polish) appears in his room. Turns out, that the ocean sent such replicas (called "visitors") to every member of the team, for unknown reasons. Those "visitors" presumably represent their greatest failures; Rheya killed herself when Kelvin left her, and he still feels guilty about that. Kelvin first lures the Rheya visitor in a shuttle, and launches it into outer space, but she soon reappears, with no memory of the incident. A conflict appears between the members of the team; Kelvin wants to live with Rheya, while Snow and Sartorius want to get rid of the visitors for good.

The novel was adapted to film thrice, the two most well-known being by Andrei Tarkovsky in 1972 and by Steven Soderbergh in 2002. The 1972 film is considered a classic. Lem disliked both versions, claiming that they focus on the humans too much, and miss the actual theme of his novel. There also exists a 1968 TV film by Boris Nirenburg. Despite lacking a huge part of the final chapter (which was back then cut out of all Russian translations) it still manages to be, arguably, more faithful than the 1972 and the 2002 movies. However, it is not well known and Lem apparently never saw it.

The book was also adapted several times for theater and even as an opera - not many SF works can claim that.