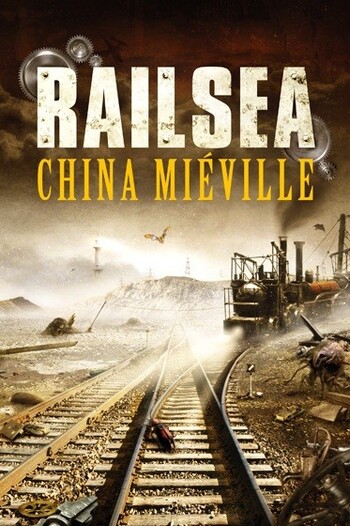 Railsea is a novel by China Miéville, officially Young Adult. However, the "young adult" part mainly means a lack of swearing, sex or graphic violence, rather than any lack of mindbendingness.

Sham ap Soorap is an unhappy surgeon's mate on the Medes, a moling train than plies the lethal ground of the railsea, the endless, crisscrossing train tracks that cover virtually every flat surface of the earth, and hunts the giant moldywarpes that live at the top of its food chain — especially Mocker-Jack, the huge blond moldywarpe that took Captain Naphi's arm. But when Sham is picked to search a wrecked train, he finds himself in possession of a MacGuffin that various nasty people are looking for.