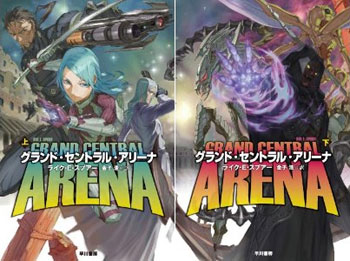 It is a place where we all meet and challenge, where bargains are made and broken and avenged, where an alliance may be built on blood and fortune. It is a place where faith is lost, and where religions are founded or proven true. It is where you shall confront, and be confronted by, truth and lies, enemies and allies, belief and denial, impossibility and transcendance.
Advertisement:

The Sandrisson Drive promises to give humanity Faster-Than-Light Travel of the distances-are-shorter-in-hyperspace variety. But when the Holy Grail, the first manned FTL ship, transitions into Kanzaki-Locke space, it finds itself not in a featureless void, but contained within an enormous sphere encompassing the volume equivalent to the solar system. Outside the sphere is the Arena, where thousands of alien races interact and compete according to the rules laid down by the Precursors who built it. And if Captain Ariane Austin and her crew are ever to get the Drive running again and get home, they'll have to face the wonders and dangers of the Arena and stake out a place for humanity in a universe stranger than they ever imagined.

The first volume of the series is available from the Baen Free Library.

Alternative Title(s): Spheres Of Influence, Challenges Of The Deeps, Shadows Of Hyperion